We use cookies to offer the best possible user experience on our website. We also use third-party cookies, to deliver personalised advertisement messages. By using our website you agree, that cookies can be saved on your device. Further information on the cookies used and on how to disable them can be found here.

Elaborated by pragmatic farmers and adapted to nature

It is almost a miracle or rather a reward if apples of the highest quality and best taste grow in the driest alpine valley. But who rewards who in Europe’s highest apple production area? Bernhard Botzner of the South Tyrolean Advisory Service knows the answer.

„Nature rewards the farmers who have elaborated a sophisticated irrigation concept in dry Val Venosta over the years so that thirsty apple trees can get the right amount of water at the right time.“

This seems to be the reason why nature produces the best fruits here and not elsewhere. Precisely because the inventiveness and willingness of Val Venosta’s farmers to best use the alpine mountain world for themselves and their families simply deserves a reward. Here it is all about mutual sympathy and respect: Both sides, nature and people, respect each other and pay tribute to each other. They have realized that they need each other. Apple trees are thirsty as well: You need app. 700 liters of water to produce one kilo of apples. An asparagus „drinks“ more than twice as much and the same is true for wheat and barley. The “thirstiest”, however, is cocoa with 27,000 liters, which is almost 40 times as much as an apple tree needs for producing one kilo of Golden apples and the like. 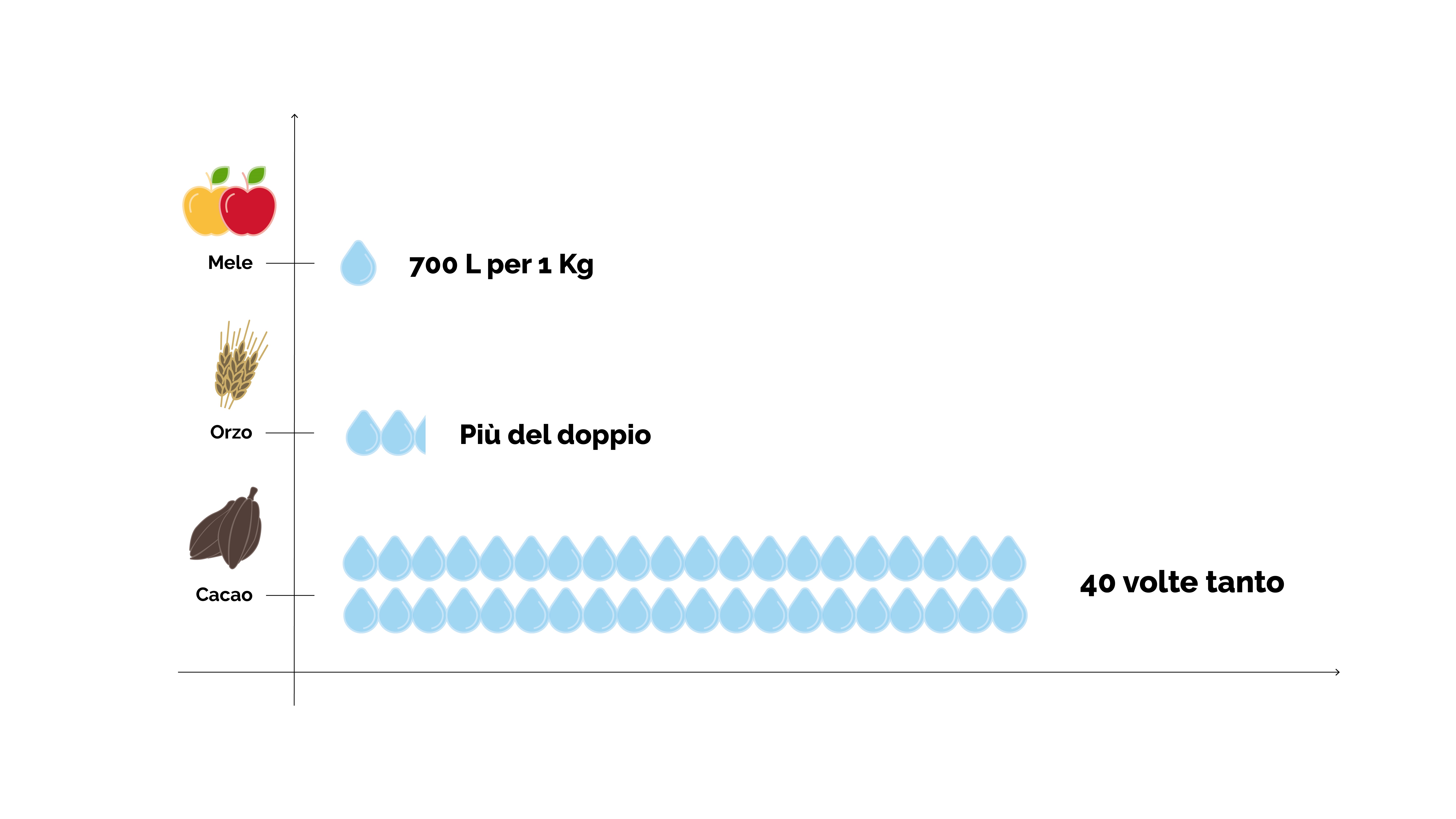 „Val Venosta is a dry valley with a length of app. 70 km with a pure east-west orientation. Very high mountains in the north usually block rain clouds. So these potential “thirst quenchers” can’t enter the valley from this direction and produce foehn wind, which make the valley even drier. Here in Val Venosta we have an average annual precipitation of 500 l per m². In comparison, near Merano has an average annual precipitation of nearly 800 l/m², even though Merano is just a few kilometers from Val Venosta.“
Due to this unique location Val Venosta’s farmers had to and still have to fight for every drop of water, which is a precious good here. While the century-old irrigation channel system called Waale in German was and still is used to fight drought along the Sun Mountain in the north, there is a whole system of water tunnels, reservoirs and deep wells at Monte Tramontana in the south to guarantee the irrigation of the apple orchards with glacier water from the southern mountains.

„Val Venosta would never have become an apple paradise without our irrigation system with its complex facets of water from the Adige river, water from the irrigation channels and glacier water. Today we are able to irrigate 99% of all agricultural areas and we already use resource-saving drip irrigation for 50% of them. Drip irrigation will further increase and be installed on 100% of Val Venosta’s production areas in the foreseeable future – both in the valley floor and in hillside locations. However, we still need over-crown irrigation during the flowering period to protect the delicate apple flowers from frost, which won’t change in future. But as far as combating drought is concerned, this irrigation system will increasingly play a tangential role due to drip irrigation." 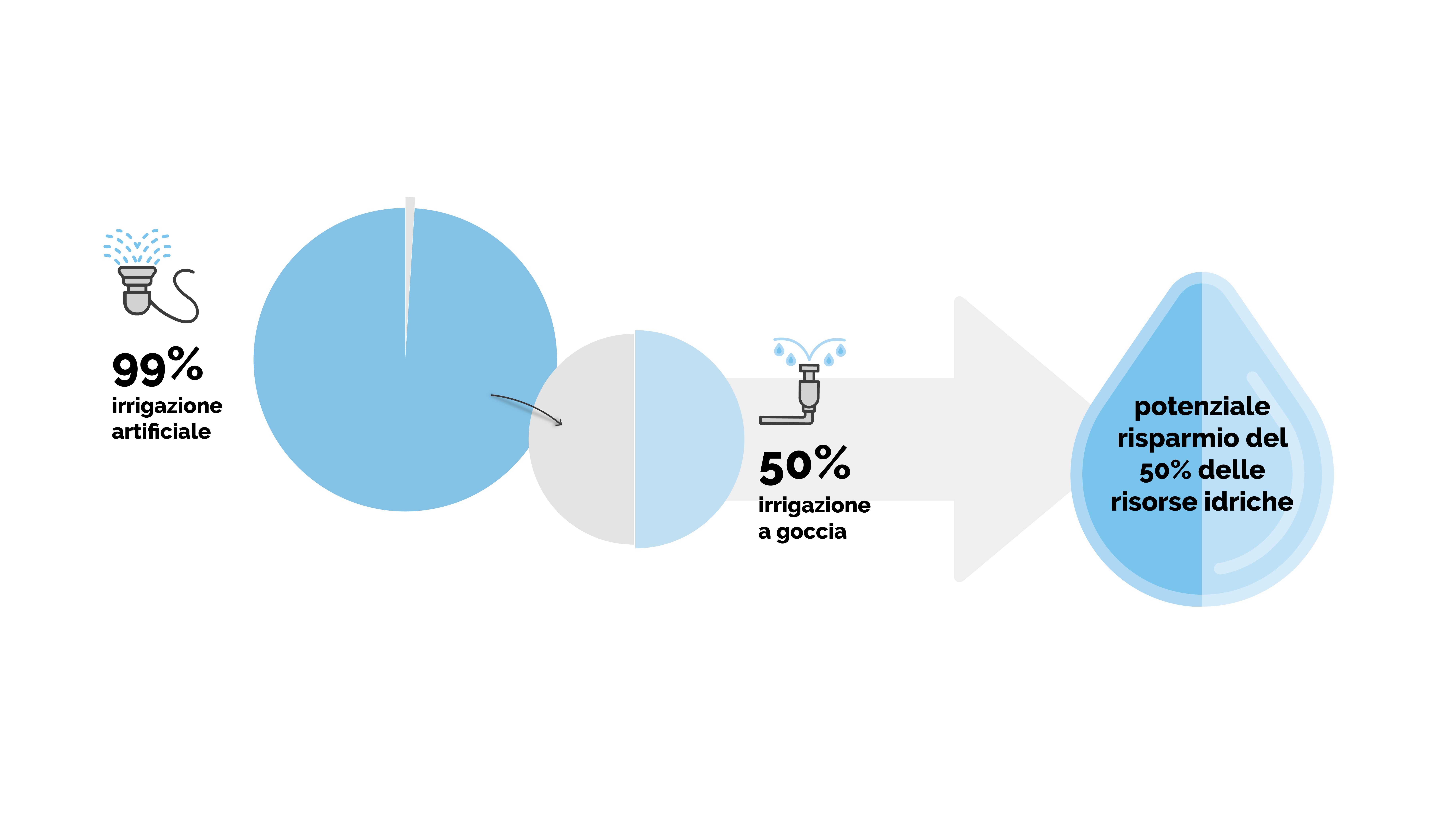 The South Tyrolean Advisory Service’s more than 45 weather stations in Val Venosta show how important and sophisticated Val Venosta’s irrigation system is. These stations provide precious data about temperature, humidity, wind and evaporation. The apple producers can inform themselves about daily evaporation with the help of a mobile app and compensate any water deficit with targeted irrigation. In summer, daily evaporation equals app. 6-7 mm/m² with an outdoor temperature of more than 30° C – in a valley with a precipitation of 500 mm per year.

„But irrigation is not only necessary to compensate evaporation, because the trees also have to develop fruits of the best quality. This is why they have to drink wisely.“

Drip irrigation, which is getting more and more important in Val Venosta, has been used since the 1990s and is based on a simple principle: irrigating the roots of the apple tree with water that is released in drops right next to the stem. This means that the so-called tractor lane between the apple trees is not irrigated and remains dry. So in midsummer it very often happens on the dry southern slopes that the turf no longer grows and gets sun-scorched, which is another important proof that the natural rainfall is not enough. Val Venosta’s apple producers have learnt how to handle the precious element of water carefully and efficiently.

Try out the large online selection and find your own favourites

My flowers for grandpa's apple orchard

A question of Val Venosta genes: thinking like a farmer is thinking for nature.
All articles
Home•Whispers from the garden•Val Venosta’s irrigation system